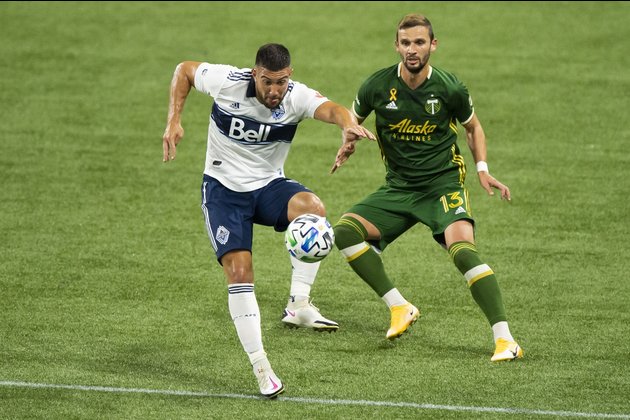 The Whitecaps (5-9-0, 15 points) were considered the home team despite the game being played at Portland's own stadium. Because of travel restrictions and quarantine requirements set by the Canadian government due to COVID-19, Providence Park will be Vancouver's home away from home for the remainder of the MLS regular season.

The Timbers (7-4-3, 24 points) entered the game in a first-place tie in the Western Conference with the defending MLS Cup champion Seattle Sounders, who played at the Los Angeles Galaxy on Sunday night.

Mora scored in the fifth minute off a free kick from the right wing just outside the top of the 18-yard box. The Timbers faked an in-swinging free kick and the right-footed Eryk Williamson instead put in a cross for Mora, who was positioned near the top right of the 6-yard box. Mora was able to flick the ball on with his head and it beat diving Vancouver goalkeeper Bryan Meredith low to the near post.

Meredith, a veteran backup who allowed six goals last week against host Los Angeles FC in his first start of the season, made six saves. He made a diving stop on a 25-yarder from Williamson in the 17th minute. He also stopped Portland's Andy Polo on a shot from outside the box in the 69th minute and made three saves in a three-minute span between the 85th and 87th minutes as the Timbers pressed for an insurance goal.

Clark's best save came in the 40th minute, sprawling to make the stop on a diving header by the Whitecaps' Fredy Montero from the top of the 6-yard box after a cross from Ali Adnan.

Clark also got some help from the woodwork, as Vancouver's Andy Rose put a header off the left post in the seventh minute.

Snowden, hero to many, traitor to others, is awarded Russian residency

WASHINGTON, DC - There will be no new coronavirus economic relief package in the U.S. before next Tuesday's presidential and ...

NEW DELHI - India and the U.S. held a "productive" and "successful" third round of 22 dialogue in New Delhi, ...

WASHINGTON, DC - The U.S. Federal Communications Commission (FCC) is proposing a rule change that would require television and radio ...

NICE, France - A man wielding a knife on Thursday killed three people in an attack at the Basilica of ...

Golfing great comes out in support of Trump re-election

Snowden, hero to many, traitor to others, is awarded Russian residency

Chinese stocks gain for third day in row, most other Asian markets dip

SYDNEY, NSW, Australia - Asian investors on Thursday ignored the ructions overnight on Wall Street and around the globe, keeping ...

Britain and India shore up economic and financial ties

LONDON, UK - Britain and India entered into a range of agreements on Wednesday to solidify their relationship and promote ...

Won't You Be My Neighbor?