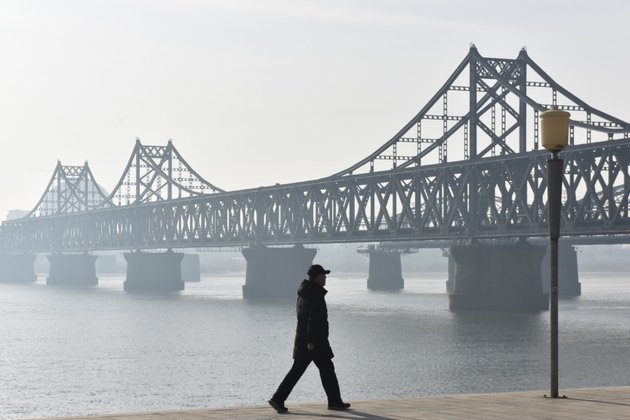 SEOUL, SOUTH KOREA - North Korea this week resumed railway imports from China for the first time since its lockdown began in 2020, potentially signaling a new phase in its approach to the pandemic.

Since Sunday, North Korean freight trains have made several round trips across the Yalu River separating the North Korean city of Sinuiju and the Chinese city of Dandong.

That is a significant relaxation of COVID-19 measures for North Korea, which has taken perhaps the world's most severe pandemic precautions.

However, there are more questions than answers about what the move says about North Korea's future pandemic approach and when it will attempt to fully resume trade with China, its economic lifeline.

It is possible the decision was driven by desperation spurred by shortages of food or other supplies. There could also be far duller explanations, though, said Peter Ward, a Seoul-based specialist on North Korea's economy.

"There are loads of reasons why you'd want to reopen it. And those reasons may not be, 'Well, there's going to be a revolution next week unless people in north Pyongyang get their food rations,'" he said.

North Korea, Ward suggested, might be increasing entry options for imports from China, which was already sending some goods to North Korea by ship. It is also possible a well-connected official in Sinuiju, which relies on trade with China and has suffered economically during the pandemic, may have lobbied North Korean leader Kim Jong Un to restart the railway imports.

Or it could be that North Korea is now confident enough in its import safety measures, following months of preparation.

What goods are North Korea importing so far?

During the pandemic, North Korea has experienced shortages of food, medicine, fertilizer, and construction supplies. Some of those items appeared to be included in the first shipments from China, according to video broadcast by several Japanese and South Korean media outlets.

"But I think there is a strong chance Kim Jong Un also used the deliveries to Pyongyang to stock up on the gifts he intends to dole out for upcoming celebrations in order to maintain loyalty to the Kim family," Jean Lee, a senior fellow at the Wilson Center, a Washington-based research organization, said.

On Thursday, a state media readout of a high-profile Politburo meeting mentioned that North Korea should prepare to "grandly" celebrate the coming birthdays of late leaders Kim Il Sung and Kim Jong Il, which are major public holidays. The Daily NK, a Seoul-based publication with a network of sources in North Korea, reported this week at least some of the initial shipments included soybean oil, a cooking staple, which will be distributed as gifts on the holidays, known as the Day of the Sun and the Day of the Shining Star.

"Everything right now is focused on preparations to glorify the Kim family - not necessarily on the well-being of the North Korean people," Lee said.

What safety precautions is North Korea taking with the import process?

A lot. In fact, North Korea appears to be so cautious that it may not even be allowing any North Koreans to enter China to facilitate the shipments. Video of the transfers appears to show a Chinese locomotive dropping off train cars full of goods to North Korea, before bringing empty cars back to China to reload.

Once in North Korea, the cargo appears to enter a disinfection facility recently constructed at an airport near the border, according to commercial satellite photos reported by NK News, a Seoul-based outlet that covers North Korea. At the facility, the goods will likely be sterilized and quarantined, possibly for weeks, analysts say.

Many scientific studies conclude it is very difficult for people to be infected with COVID-19 through contact with contaminated surfaces or objects. However, North Korea is taking no chances, Colin Zwirko, senior NK News correspondent, said. 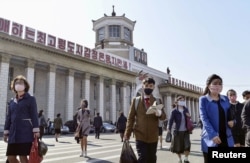 "North Korea maintains the most severe 'zero-COVID' policy in the world because an outbreak could lead to the collapse of the entire system, they admit this in state media. This means they are willing to prevent infections at all costs, even if it requires quarantining objects for long periods that might stand little chance of transmitting the virus. It's a better-safe-than-sorry approach," Zwirko says.

In the past, North Korean officials have embraced numerous scientifically questionable theories about how COVID-19 spreads. The virus, state media have reported, could spread through migratory birds, snow, air pollution, or anti-Pyongyang propaganda leaflets sent by South Korean activists.

How much trade will North Korea allow?

So far, Japanese and South Korean media have reported at least three roundtrips by freight trains from Sunday through Wednesday. South Korean officials said Thursday they have "steadily detected" train activity, but they could not say how long the train service will continue.

On Monday, China's Foreign Affairs Ministry confirmed that rail traffic between North Korea and China had "resumed operation," suggesting the activity could become regular. It is not clear, however, how quickly the quarantine and disinfection facilities will fill up. Some analysts speculate that that process could be a choke point limiting a wider resumption in trade.

So far, it appears that the trains have only sent goods in one direction, to North Korea, but Daily NK reported Thursday that some North Korean trading companies have begun preparing items for export to China, following an order from authorities.

Both sides have a long way to go to restore pre-pandemic trade levels. According to Chinese government data released this week, China's trade with North Korea in 2021 fell about 90% compared to 2019, the year before the pandemic restrictions began.

How will North Korea handle the pandemic moving forward?

While many analysts think North Korea's trade with China will gradually increase this year, others warn there could be setbacks, especially as China calibrates its own "zero-COVID" policy and struggles to keep out the more transmissible omicron variant.

FILE - Staff of the Pyongyang Department Store No. 1 disinfect the store to help curb the spread of the coronavirus before it opens in Pyongyang, North Korea, Dec. 28, 2020.

It is also not clear whether North Korea will loosen other pandemic restrictions, such as its domestic travel restrictions and border security policies. Since the pandemic began, North Korea has dramatically increased patrols along its border with China, reportedly even issuing shoot-to-kill orders for illegal crossers. The measures have led to a drastic reduction in the number of North Korean escapees and cut off virtually all informal trade, such as smuggling and remittance payments.

Pyongyang may not feel comfortable easing many of those restrictions until it has tools, beyond lockdowns, to combat the virus.

For How Long Will North Korea Be Able to Sustain Its Lockdown?

North Korea has refused offers of COVID-19 vaccines from other countries and the United Nations-backed COVAX vaccine distribution initiative. According to the World Health Organization, it is one of only two countries yet to begin vaccination campaigns, the other being Eritrea. 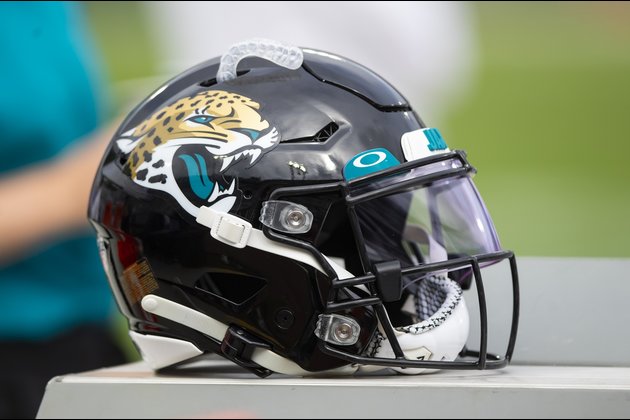