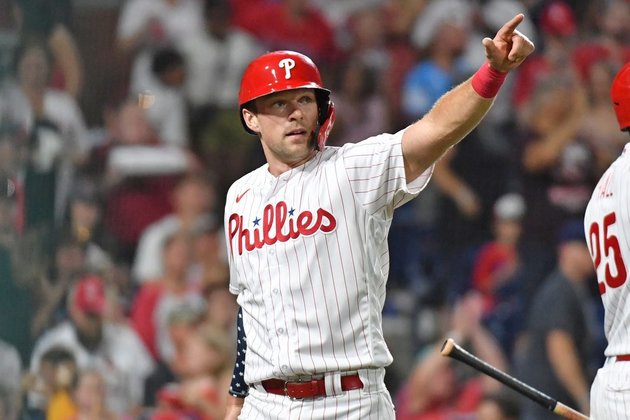 For the past month, the Philadelphia Phillies have gained ground in the wild-card race due to their ability to win games against fellow contenders.

Four wins in their last visit to Washington also helped their cause, and the Phillies will look to keep up that trend Tuesday night when they host the struggling Nationals in the opener of a three-game series.

In its past 29 games since firing manager Joe Girardi on June 3 and replacing him with Rob Thomson, Philadelphia is 20-9. Under Thomson, the Phillies have racked up a combined nine wins against San Diego, Milwaukee, St. Louis and Atlanta -- four teams ahead of them in the standings.

The Phillies won their seventh series under Thomson last weekend when they took two of three from the visiting St. Louis Cardinals. After allowing four straight home runs in the first inning of Saturday's 7-6 loss, the Phillies claimed the series with a 4-0 win on Sunday night when Zack Wheeler allowed four hits in seven innings while Rhys Hoskins and J.T. Realmuto homered.

Hoskins homered for the fourth time in five games and reached base safely for the 14th straight game. Since June 7, the first baseman is hitting .344 to go along with nine homers and 17 RBIs.

"It's huge," Thomson said. "The more guys we have in the lineup who are hot, the better off we're going to be."

The Nationals head to Philadelphia on a five-game losing streak with each loss coming by three runs or fewer.

Luis Garcia accounted for both Washington runs Monday in a 3-2 loss to the visiting Miami Marlins. He had a tying single in the eighth inning and Maikel Franco scored on his double-play grounder in the 10th.

"I'm about as frustrated as anybody," Washington manager Dave Martinez said. "Because a lot of the games we should win, and we're not."

Washington played virtually all of Monday without star slugger Juan Soto due to a tight left calf. Soto drew a walk as a pinch hitter in the eighth but was lifted for a pinch runner.

Soto, who went 2-for-19 in last month's five-game series against the Phillies and is hitting .226 this season, was injured tracking down a double by Miami's Bryan De La Cruz in the third inning on Sunday and is day-to-day.

"Everything was fine," Soto said. "They said it's just a little tight, so just going to take a couple days and see how it goes."

Philadelphia is without starting pitchers Zach Eflin and Ranger Suarez and one of the fill-ins will open the series when left-hander Cristopher Sanchez (0-1, 4.60 ERA) is recalled from Triple-A Lehigh Valley. Sanchez is replacing Suarez, who landed on the injured list with back spasms, and will make his third career start.

Sanchez is appearing for the Phillies for the first time since June 11 against the Arizona Diamondbacks and has allowed four runs in 1 2/3 innings in two previous appearances (one start) against Washington.

Washington right-hander Paolo Espino (0-1, 2.80) will make his fifth start of the season and owns a 3.93 ERA as a starting pitcher this season. He last pitched Wednesday when he allowed four runs and five hits in 4 1/3 innings and took a no-decision against Pittsburgh.